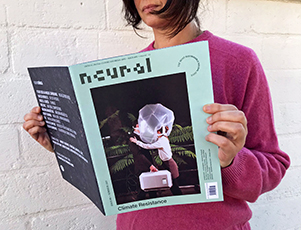 Neural is a printed magazine established in 1993 dealing with new media art, electronic music and hacktivism. It was founded by Alessandro Ludovico and Minus Habens Records label owner Ivan Iusco in Bari (Italy). In its first issue (distributed in November 1993) there was the only translation in Italian of the William Gibson’s Agrippa (a book of the dead) book.[1]

The first topics covered were: cyberpunk (both as a literally and political movement), electronic music, networks and BBS, virtual reality, media, science fiction and UFO. The magazine’s mission was to be a magazine of ideas, becoming a node in a larger network of digital culture publishers. The magazine was also committed to give its topics a proper visual frame: focusing on graphic design and how it could have expressed the electronic culture in a sort of printed ‘interface’, exploiting at the same time the “sensorial” possibilities of the printed page. So, for example the page numbering was strictly in binary numbers for 3 years, then decimal figures were added aside. There was a department with stereogram pictures and the centerfold hosted a few optical art artworks. The graphic design included a fixed space in every article for contact and links, being inspired by the Whole Earth Catalog experiments.[1]